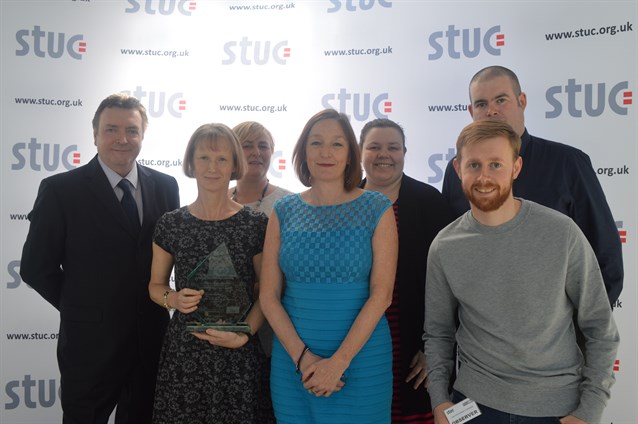 Julie Atkinson from Aegis the Union has received the 2016 STUC Helen Dowie Award for Lifelong Learning in recognition of her outstanding contribution to the Unionlearning project in Aegon UK. First Minister Nicola Sturgeon presented Julie with her award on 19th April at the 119th STUC Annual Conference in Dundee.

The STUC Helen Dowie Award for Lifelong Learning Award was established in 2006 to commemorate Helen Dowie's lifetime achievements in lifelong learning and to recognise other trade unionists who continue to demonstrate their commitment to union values and lead the learning movement forward in Scotland.

As a Union Learning Representative (ULR), Julie suggested and helped develop the mentoring programme within Aegon UK where she is a staff. Julie also introduced drop in sessions to raise awareness of learning opportunities and these sessions have now become part of the workplace culture. Julie was also heavily involved with the introduction of the Modern Apprenticeship programme into Aegon UK, which is driven by the union.

Julie is the second of Aegis' Unionlearning reps to win an award this year. Last month Jacqueline Morrow from HML in Derry received the Union Learn Rep of the Year Award at ICTU's Union Learn Conference in Belfast.

Commenting on the awards, Aegis the Union General Secretary Brian Linn said: "Winning the union learning awards in Scotland and Ireland this year is an amazing double achievement for Aegis the Union.

I'd like to congratulate Julie and Jacqueline for all the hard work they've done to help make the awards possible.

Aegis the Union's learning projects have undoubtedly helped to embed learning cultures within Aegon UK and HML  whilst strengthening the strategic partnerships between Aegis the Union and employers."

Aegis also presented a motion regarding tax relief on private pensions during the conference, calling on reforms in tax relief. During the afternoon fringe sessions on Monday, Aegis presented on the Leadership Development project along with two other unions at Scottish Union Learning's "Dynamics of Union Leadership: The Way Forward" event. On Tuesday, Aegis was among the unions which sponsored "Unions into Schools: Campaigns for Young People" event, aiming to inform youth better on the workplace atmosphere and trade unionism.

“A member could come up and talk to me to let me know what's going on in their team, and if something's not going well I'll see what can be done to help.”